WHO IS LYING ABOUT SCHOOL FUNDING? 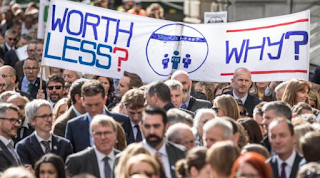 A week ago I joined almost 2,000 headteachers marching, ever so quietly, to Downing Street to protest about the funding crisis in schools. That morning the Conservative Government Minister, Nick Gibb, repeated, “We are spending record amounts on school funding. We are the 3rd highest spender on education in the OECD. We spend more per pupil than France, than Germany or Japan” (BBC Radio 28-09-2018)

Headteachers keep whingeing about cuts in funding and must be lying. We are trusted by 87% of poll respondents with government ministers only believed by 19% (Ipsos Mori 29-11-2019) Is nothing trustworthy?

This week we found out that the “more money” incredibly, unbelievably, outrageously includes the money lent as student loans and the fees parents pay to private schools. Nick Gibb is counting £17 billion pounds lent to university students at 6.3% interest as government funding of education. (Sean Coughlan’s article of 03-11-2018 - https://www.bbc.co.uk/news/education-45706603)

If you have opted out of the state schooling system and you are paying for a private school place for your child are you surprised that this money, the fees you pay to private schools, is counted as state spending? ( https://www.bbc.com/news/education-45738158)

"It now costs more than £30,000 to send a child to board for a year. And it's £15,500 to send them to a private day school. (Independent 10-05-2016 where their statistics also show an increase in private school fees of 550% in the last 25 years) The government is counting all this money as their investment in state education.

The UK Statistics Watchdog has launched an investigation into the government’s spending figures. (https://www.bbc.com/news/education-45746062) Maybe because they are incredible.

My local MP is currently writing to his constituents trotting out the party line on government spending on education, word for disingenuous word, including a seemingly random reference to government spending increasing by 50% since 2000. But the money spent by students on student loans has trebled since the year he quotes, (because your party trebled the fees) and the fees paid to private schools has risen massively (because they can) since 2000. So MPs can blindly believe their minister and repeat his dishonest manipulation of truth to your constituents. It’s nearly 5 years since 31 Hertfordshire headteahers lobbied our MPs. In response to our concerns one offered subsidised wine on the House of Commons veranda. At no time since, it seems, have they asked ministers or civil servants if we were lying.

A local conservative school chair of governors told me recently that she only reads my blog when someone shows it to her because they outraged. I have yet to be sued for anything I write. I think I do my research thoroughly and choose my words to be provocative and precise. I have been trying to find out if I can use the word “lies”

Either, our government minister, MPs and civil servants are deliberately misleading parents worried about the funding of their children's schools. Or, they can't be bothered to seek out the truth.

We already know that their level of competence fails to manage Brexit. And we know that while they fiddle around with the EU our police, prison service, care for the elderly, social services, education and housing priorities are left to fester.

So what do demonstrating headteachers claim as the funding crisis in our schools?
It was good to see Hertfordshire primary headteachers joining with colleagues from all over England demonstrating last week. I am proud that we spoke out for our children.