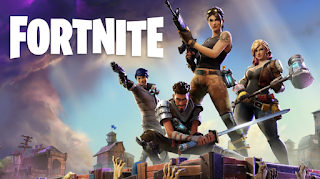 I met a parent shopping with her 13 year old daughter. Her 11 year old boy was at home, safely left alone with some snacks and advice not to open the front door. She cheerfully announced that he was on his computer 10 hours a day playing Fortnite. She thought I was mad when I expressed schoolteacherly concern andsuggested limiting this.

“7 out of 10 children said they had missed out on sleep because of their online habits and 60% said they had neglected school work as a result.” (National Online Safety 2018)

The chemical reaction in an adolescent’s brain from addictive computer games – and our kids are addicted – is the same as that produced by cocaine.

Kids brains and bodies are developing all the time Fortnite, and others, Game producers consult psychologists about how best they can make their games addictive. The games promote the release of dopamine which is how cocaine works. Youngsters are particulary susceptible to its effects, deliberately designed to satisfy teenagers’ craving for instant gratification as they have not yet developed the capacity to resist this. (For much more on the science look up video-game-drug-addiction at Psychology Today)

As parents, are we worried about this?

Fortnite is much cheaper than cocaine, ecstasy, MDMA, spice, speed…
This is a blog about Fortnite and you know I’m going to suggest that our boys’ obsession with this game is bad for their physical and mental health, family life, schoolwork and, even, their future romance prospects.

And it’s a great game and kids should play it. Just not so much.

In my various surveys of hundreds of kids, over 90% of boys aged 11-15 admitted to loving the game. Less than 40% of girls were plugged in every possible day but most say they are shackled to their phones and social media. Although this blog is specifically about FORTNITE the benefits and dangers of children being always connected apply to all.

Do you know if your kids have online access when they’re meant to be sleeping?

NSPCC and NCA (National Crime Agency) warn that one in four children have been contacted by strangers by voice and or text when playing Fortnite. It’s a social game and offers new opportunities to paedophiles. Google the NCA warning and read national newspaper stories about the 12 year old offered £50 to perform a sex act online. This sort of danger is widespread.

Fortnite is free but kids can buy 100 tiers of weapons outfits and gear that can be purchased on line. Parents have discovered, their credit card is associated with the site and receive big bills. Kids on the Spanish beaches were wearing Fortnite hats and T shirts. My niece’s primary school has banned Fortnite dances.

Accounts have been hacked and money stolen. (Telegtaph April 5 2018) A friend of mine rewards his 14 year old son with money to buy Fortnite gear if he reads for half an hour each evening. They even sit and read together, which lets boys understand it is OK to read as dad does it.

Oh goodness, take them out without phones.

Forbes reported that Fortnite brought in $126 million in February, $223 million in March and $296 million in April. The company has so much cash that it's forming a $100 million prize fund for upcoming Fortnite competitions. (July 2018)

Fortnite is a magnificent, rewarding, and exhilarating phenomenon. It is a co-operative survival shooting game that lets players build structures out of materials they scavenge from the game world. Most play the Battle Royale version, which pits 100 players against each other, some of whom are in small teams, to see who is the last man standing.

Players are there to kill others and the violence is presented in a cartoonish way – there’s no blood and gore. (If you want lots of blood try “Call of Duty” a game with an 18 certificate which parents have told me they have bought for their 12 year olds. Around 60% of my 13 year olds had played COD and more than one was off school on a new version launch day.)

The notion of kids “killing” is controversial in itself.

Have you noticed, this summer that there’s no kids on the street, that the various “Spotted In...” Facebook sites are hardly mentioning wayward youth, that the parks are empty? As a headteacher, I’ve not had a single call from the police. If you get the opportunity, read Ray Bradbury’s 1951 short story, “The Pedestrian” where there is no crime in our cities because everyone is at home in front of giant multi-media screens. Walking at night is “not unequal to walking through a graveyard."

I guess it’s good that we know where our kids are.

Ever the English teacher, I asked a class of 20, 13 year old boys to describe their perfect weekend. I didn’t count but most said “Fortnite.” When pressed, because I was an innocent until very recently, they said something like, “Yes, the whole weekend.”

I try not to suggest that I am some sort of superior parent or human being. I can remember the joy when my four year old daughter first got up on a Sunday morning and put the video on without me waking. In terms of computer addiction, let me tell you about Crystal Crazy. 102 levels of anti-missile protection and weapons that ended up taking up about three hours a night, every night. It was the time when games came on discs and my eyes dripped gore, my sleep featured crashing spacecraft. I took a photo, on a real camera, when I completed Level 102. Fatima came from Paris to visit and I left her alone whilst fulfilling my game addiction. I have not seen her since. Knowing from my tobacco addiction that throwing the disc in the bin would only mean I went through the rubbish to retrieve it next day, I eventually smashed the disc. I was 40 years old.

An 18 year old Economics student at my school, two weeks and six lessons short of his final, perhaps career-forming, A Level exam, announced that he had been up until 5 a.m and achieved a 23 person “single kill,” which is apparently very good. The game keeps you trying to get better and players can see their score improving.

I have put on “prep” every term-time evening for GCSE boys who were going home with good intentions but plugged straight in to Fortnite and did no homework. Younger boys come into school with scraps of paper hastily scrawled moments before the lesson.

This is now me trying perhaps too hard: Boys’ opportunities to have girlfriends/boyfriends are obviously diminished. As a father of girls I have would have welcomed Fortnite because ordering them not go out with boys until aged 35, and then with me as chaperone, did not work. We have a new school year starting with our boys going cold turkey and some of them not coping. As boys spend more time alone in their bedrooms, less time studying, do less well academically, the girls may turn away from romantic liaisons, relationships, marriage, futures…

There’s no doubt that young women are now doing better than men and are getting more of the top jobs. Only the fact that old men are still in power and can discriminate against women is holding them back .

Of course, it’s not the end for all boys.

However, I have 32, 15 year old boys entering their final GCSE year whose end of year reports clearly show that their all-consuming interest is Fortnite. I am now going to ask parents to leave us their 15 year olds until 5pm.

Back to the mental health concern:

A nine-year-old girl is in rehab after becoming so addicted to a video game she wet herself to avoid moving and hit her father when he tried to stop her playing. (BBC New Voice 17th June 2018)

The World Health Organisation has classified playing video games on the internet as an official mental health disorder. This means one can get treatment on the NHS.

'Gaming disorder' is defined as 'a pattern of gaming behavior characterized by impaired control over gaming, increasing priority given to gaming over other activities to the extent that gaming takes precedence over other interests and daily activities, and continuation or escalation of gaming despite the occurrence of negative consequences.' (WHO 2018)

Some views to leave you with:

I was talking with a really pleased mother who told me,“I’ve got my 10 year old son back. He was getting obsessed and tetchy, playing Fortnite all the time. It was hard for a week or so but I stuck to my guns and he now plays for two hours every other night…”

Did I mention the anger problems kids have when “losing” at computer games?

A Deputy headteacher gave me this, about his sporty 13 year old, “I came home to find that he’s got angry at losing at Fortnite and threw the controller through the TV screen.”

Another teacher takes the console to work every day and is in endless rows with his addicted 14 year old.

If as parents we can’t negotiate harm reduction with our kids over a computer game, how are we going to cope when they come across ‘drugs’ and other challenges?

What price a bit of peace and quiet?