Ofsted Will Listen To Any Old Rubbish 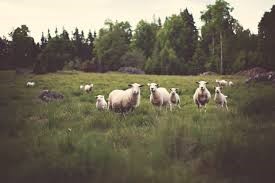 Someone has anonymously informed Ofsted that I keep a flock of sheep on our school playing field. This is easily checked and is untrue. That surely will be the end of the story.

Ofsted have told me, with certainty and repeatedly, that they will take note of malicious, anonymous, complaints no matter how bizarre, blatantly untrue or malicious. “We follow procedures,” their unhelpful staff will tell you, and they will repeat these words over and over until you tire. The complaint about our non-existent sheep will be used as evidence by our next Ofsted Inspector.

Another complainant has told Ofsted that I only employ people with beards and that all classroom walls are painted black. I know the person who has made this complaint and he has done so for devilment. Of course, Ofsted can look up our various social media and clearly see this complaint is not worthy of consideration. But, no, they will put the complaint in our evidence file and an inspector will look my shaven face in the eye and question my obsession with beards.

If you feel we put a child at risk, contact the police. I want to react if there is a complaint about safeguarding at our school and I welcome policing on children’s safety. But beards and sheep?

Ofsted very recently judged our inclusive school to be outstanding. Having experienced seven inspections since their creation in 1992 I have had concerns over various aspects – one lead inspector told me that she would haunt me for the rest of my career – and I still believe that the individual lead inspector can cover us in glory, damn us with faint praise or condemn us to mediocrity.

But now I am writing to complain about Ofsted. Here’s the story:

On 16th May 2017 Ofsted wrote to me about an anonymous complaint. The complaint said that I had employed an unqualified teacher of (something like) Sociology.

I was notified that a complaint had been made against the school exactly five months previously. Having kept the complaint for 22 weeks Ofsted immediately sent a copy to our funding agency - the EFSA.

The EFSA use the word “safeguarding” four times in their interpretation of the letter and demanded a four day turnaround on an action plan. Our funding was under immediate threat.

The complaint itself, “concerns a teacher has been employed with no qualifications or experience working with children.”

As Ofsted know, schools have the legal right to employ unqualified teachers. This is no grounds for complaint nor investigation. The government created First Direct and Schools Direct programmes which specifically attract adults who have no experience working with children. So where’s the safeguarding issue if we had employed teachers who were unqualified or student teachers inexperienced in working with children?

Ofsted would not allow me to see the actual complaint but we were told that it would be included “for consideration in the evidence base of your next inspection.”

Ofsted retain secret complaints and use it when inspectors come to the school. Will they discuss it? Will they give us more information? How could we respond in such a way that satisfies Ofsted?

Ofsted gave us so little information, we could not investigate, but we could be judged, despite an unblemished safeguarding record. By stealth, I did find out that the anonymous complaint was from the Sociology teacher’s litigious, malicious, permanently stoned ex- partner, written in terrible, semi -literate scrawl.

Oh, and the Sociology teacher has a degree, qualified teacher status and experience working with children. This is so easily checked but Ofsted will not do so, any more than they will use Google Earth to check on the status of the 200 foot slave galley dominating the tennis courts.

So I complained about Ofsted.

Guess who you complain to? Ofsted, of course. And they will respond “within 28 days” which means “on day 28,” and they stuck to their line: Ofsted will listen to, act upon and damn anyone they like based on anything anyone throws to them.

So I complained about the Ofsted process. Guess who you have to do this to? Ofsted, of course, and how long will they take? 28 days.

When our outstanding report was in draft form I was able to speed up its publication by contacting a national officer who wrote on our behalf so that the report was published on the afternoon of the 27th day – Ofsted being obliged to publish within 28 days. I did phone a few times to offer to help proof read our report. I had this image of three old men sat in a poorly lit room, poring over appropriate punctuation as gore dripped from worn out eyes. Ofsted turned down my requests, gracelessly I might unnecessarily add.

From the draft report to the final report two words were changed: “much-loved” became “well respected” and it took 27½ days.

Once upon a time the Fureys were playing New York when an American superstar asked to join in on an Irish ballad. The band played really, really fast and the star asked why. The answer suits Ofsted, ”Because we can.”

I have written previously about my belief in the concept of Ofsted http://chauncyhead.blogspot.co.uk/2015/03/what-will-we-teach-our-children.html and I have no doubt that Ofsted has improved the quality of education in schools.

However, their procedures are clumsy, bureaucratic and unhelpful. Their equivalent of customer services would close most businesses and the staff dealing with phone calls are ill suited and disinterested in their work.

Parents and others must have the right to complain about headteachers, governors and schools. The DfE give clear advice on the procedures (https://www.gov.uk/complain-about-school/state-schools)

Under the heading, “Making a Complaint” the first words are: Follow the school’s complaints procedure.

Follow these steps in order:
Only move on to the next step if your complaint is not resolved.

You can complain to the Department for Education if you’ve followed all the ‘Making a complaint’ steps.

If you google “Complain about a school to Ofsted” you will be led through the same procedures:

“We (the DfE) can only look at complaints that have followed all 3 steps. If you did not go through all these stages with the academy, you must go back to them to complete the process.”

So it is very clear that people wanting to make complaints must, must, must, go through the school’s complaints process and the government department will not, not, not, take on board a complaint that is outside these procedures.

But Ofsted do what they want.

In our case, Ofsted told the Funding Agency of the maliciously nasty complaint. Why? The ESFA’s rules are clear and transparent on what they can investigate.

What the ESFA will investigate
We will look at complaints about academies that fall into the following areas:

My career is exalted by an outstanding judgement. I couldn’t have predicted the wild staff celebration when the result was announced. Our parents and students are thrilled beyond my expectations and our financial future is secure. And we owe this, in part, to Ofsted being able to properly judge our work.

The DfE, ESFA and Ofsted itself, say that complaints must first be referred to the school. Ofsted break their own rules and wrap up their failings in their own special complaints procedures, guaranteed to support malpractice. Ofsted recently bragged that there were fewer complaints against them. When they investigate and justify their own failings headteachers see little point in complaining. I have no qualms in criticising Ofsted for their outrageous handling of complaints.