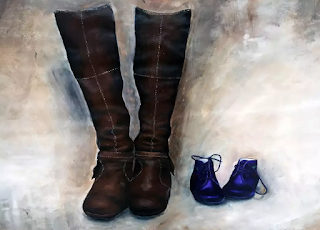 Post 1945, working class children left school at 14 and went into unskilled jobs and apprenticeships . In the new secondary modern schools working class children were destined for working class jobs. They sat few if any exams and school expectations were low. Grammar schools educated a quarter of our 12 year olds – depending on availability - and these children were destined for jobs in offices. The privately educated were our MPs, doctors, lawyers and senior civil servants. Everyone knew their place.


Unless we reopen the factories, shipyards and mines secondary modern schooling will not provide the skilled workforce we require, unless Sports Direct and McDonalds take over more workplaces.

Apparently (they got consultants in for this) if you select the kids doing best at tests at age 11 and put them in one school, that school will have the highest achievers in GCSE tables five years later. Stunning. Apparently, it is also hotter near the Equator.

All schools should be good schools. We have the best teachers ever and more parents are happy with their child’s school than ever before. Government claim “parent choice” as their goal – well you can’t have selection and parent choice.

Here’s an email I received on Wednesday: ”Do you only accept children who live in your area? I live in X and there is one school I like but both my children are below average and worried they will fail the entry test.”

From the parents of her friends to my Year 6 granddaughter, “You should go to school P rather than the excellent local school S because you’re academic.”

Meanwhile 12 miles away, “We wanted her to go to school H but it is too academic for her,”

Half way between the two, “The Headteacher told me that if my daughter’s reading age was one iota below her chronological age she cannot come here, it is not fair on my staff.”

We have schools, Ofsted “outstanding” schools, which claim they are, “not good with special educational needs.” School M made its TAs redundant and then claimed to be unable to admit kids with SEN due to lack of staff.

In a colleague’s primary school one parent confronted the head with, “I do not want him doing these art things. Just make sure he can pass the entry test to school D.”

Welcome to Hertfordshire, where each year the county proclaims Watford Girls Grammar School as a top comprehensive, alongside Watford Boys Grammar . They must be great schools: the head of one was made a dame and the other is a schools commissioner…..fancy that.

Mrs May is keen for Faith Schools to select all their kids on the basis of religion. Has she tried getting a non-believing family into a Jewish or Catholic school where the admission criteria starts with attendance at a particular place of worship and then to siblings? In encouraging division amongst the population and in promoting isolation amongst our minorities Mrs May is an ideal candidate for a visit from the Prevent people.

She is keen on new parent-sponsored single faith grammar free schools. Well, seeing as parents are not opening free schools but faith organisations predominate, she knows this is not going to happen. Perhaps somewhere like Leeds can have a Muslim Grammar School, a Jewish Grammar School, Hindu, CoE and Catholic grammar schools alongside a non denominational boys grammar, and a girls grammar nearby. Imagine the school run in Leeds.

They say that the selection of the most academic 11 year olds will not create secondary modern schools and certainly not “sink schools” where expectations of exam success are non existent. Yes it will.

What we could do is select all the academically able kids and put them in schools with thatched roofs. Then, when they achieve their good GCSEs we can call for the impositioin of thatched roofs throughout the country.

May pretends that children will move between the selective schools according to individual student progress, as if there is no limit on how many kids you can fit in a classroom.

Apparently, lots of parents who are in select, expensive catchment areas fear the imposition of grammar schools. But, Mrs May says, new grammar schools will not be forced on areas that don’t want them. Can we do the same with capital punishment ? Maybe impose it in Scotland only?

The chief inspector of schools says the pro grammar school argument is “Tosh and nonsense” and just about all the evidence points to grammar schools increasing social inequality. But what did we expect from a government which has introduced tests at 11, 16 and 18 designed to fail more students. 47% of English 12 year olds are classed as failures by their performance in tests -perhaps we could stamp this on an appropriate part of their anatomy, so they don’t forget their failings.

Each day I watch the girls come off the train from outside the catchment area of the oversubscribed selective/non selective school P and I wonder how they got places.

We don’t have to worry about the 11+, in Bishops Stortford 3 of the 4 secondary schools have Saturday morning entry tests and all claim to be comprehensives. I know of five schools that select up to 10% of their intake on aptitude for music or languages. Howzat!

Theresa May is right about selection by house price – you can get a 3 bedroomed semi for £500,000 in the catchment area of one of our highly praised schools. The children of educated, midlle class parents score highly on their primary school tests, usually with private tutor support. Of course, Ofsted say they are outstanding. Ofsted claimed my nephew’s white, middle class, catholic school with lower than average frees school meals, EAL students and SEN kids was, “highly inclusive,” and “outstanding.”

One of my part time staff coaches 18 boys from one school; money helps.

Disgraceful Gove started the drive to put working class kids back in their place. Mindlessly, vacuous Morgan continued the slide and now the unsuspecting puppet Greening will be charged with driving even more teachers into other jobs, more children ringing Helpline in despair over their grades and more families accepting that education and British society is not for the likes of them.

The education system can encourage social equality. Rather than taking a small proportion of bright poor kids and sticking them in grudgingly benevolent grammar schools lets put massive resourcing into the schools in poorer areas. Get the best teachers with higher salaries and subsidised housing and create the infrastructure and local economy to employ the high achieving youngsters.

Watch them shine.
Posted by Dennis O'Sullivan at 01:10